get your fix of city straight to your inbox

It Follows brings us back to a superior time in scary cinema while also offering a new kind of fright — one that furnishes faith for a better future in horror.

From the moment the film begins, we are in. We are confused. We are subconsciously unmoving. We are, most importantly, freaked out. What could this girl be running from in a quiet, suburban neighborhood with her dad standing in the front door and a friendly neighbor unloading groceries just steps away? Why is she utterly still, her chest heaving, and then darting to her car, desperate to get away? And what the hell was that final phone call?

It Follows returns us to scary stuff with meaning — beyond cheap thrills and naked gore. There is symbolism through every dark, steady step that reminds us of films that mutter ‘redrum’. Why? Because we simply don’t get it right away. We get to discover, together, as an audience, what’s going on, why it’s happening and what it means to all of us individually. What makes It Follows new is that the monster, the demon — the lifeblood that keeps the film soaring — is invisible. Because it might not actually exist.

The monster here is a person that can look like anyone, someone you know or a stranger — it doesn’t matter. And it’s walking towards you. If it touches you, you die a gruesome death. Oh, and no one else can see it but you. So yes, if you take a car a few hundred miles, it’s going to take a few hours for this thing to walk towards you. It Follows masters the slow burn.

And what prompts this horrifying unhurried chase? It was passed from one person to another during sex. Once sex happens (the exact constraints of the acts aren’t totally laid out), the infected person stops being followed, and the killer ghost follows the other person — but if it kills that other person, then it’s back to the first jerk. Teens that decide to have sex with each other are then painfully, slowly hunted by something that will kill them. It’s unavoidable. Like the way Sleeping Beauty is going to prick her finger on the spindle despite all the King and Queen do to prevent it. 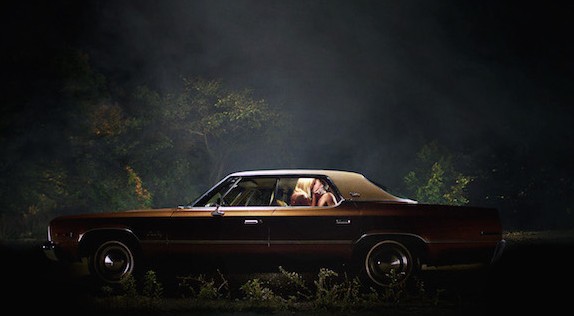 And here, there isn’t a parent in the entire film. They’re spoken about — the wrath and worry of ‘mom’ is definitely mentioned, but it’s the kids’ show. They run around town — this gang of childhood friends — deciding whether or not to try to pass it on to some unknowing soul or to just keep running. And of course, the protagonist is a beautiful blonde who everyone seems to be in love with, but she sleeps with the mysterious cool guy — who is only mysterious because he’s literally trying to have sex to save his life. The blonde is the only one who can see the monster; her friends are just super supportive. This flashing warning of death doesn’t stop the other male leads from trying to sleep with her. They would literally rather chance being slaughtered than miss an opportunity to sleep with the gorgeous and adorably twisted blue-eyed lead. The symbolism is almost over the top — but the pacing and freakiness throughout leads us to believe we are just in a normal scary movie. But, no, that’s not what this is.

Scary movies seem to be moving towards menacing films. From self-aware Cabin In The Woods to almost entirely symbolic, The Babadook, audiences are clearly asking for more when they go out for a shock to the system. It Follows has what we’re looking for when we head to the theater — drawn out, anxiety-inducing pacing, over-the-top gore and shocks that force the body to re-adjust. The actors are still all unknown. This just has to be the case. We aren’t ready for well-known faces in horror — other than Drew Barrymore’s short-lived appearance in Scream — and I don’t think anything other than a quick early death will ever change that.

Now, It Follows wasn’t perfect, of course. A film that has as many rules as this one does is bound to stumble occasionally — but isn’t that what we love to talk about as we walk out of the theater doors? But wait, if it’s just walking, why and how is it on the roof that one time? Why don’t they just have sex with a prostitute? Then it would move on very quickly away from them. Well, we can wonder, but it doesn’t take much away from everything else we experienced.

It Follows is also set apart in the horror world because it isn’t entirely clear when we are. At first, we assume it’s present day. But small things keep popping up throughout that are fantastically intriguing. One character has a futuristic-looking clam where she continually offers knowledge from a glowing screen. But then, during one hospital stay, the nurses are dressed in 40s uniforms. And best of all, the score of this movie is somehow deeply rooted in the 80s. The films of the 80s — not Madonna belting out her latest hit — but the electronic-y, uncomfortable soundtracks that every film used in the 80s. It’s so perfect. Because a huge part of what this film is trying to say is that kids are always going to grow up and that’s how it has always been and always will be. The best they can do is walk away — making sure to be a few paces ahead — from all the judgment that often feels like it’s going kill them.

looking for film, fashion or anything else in particular?

I am an NYU graduate starting her own business in the social sector! I love nights out at The Comedy Cellar with coffee and dessert at Cafe Reggio, just as much as I love to stay in and binge-watch Orange is the New Black with Chinese takeout. If you love to do it all (while looking mega-chic) Miss City Discovers is your weekly MUST-read! Read More…